A 78-year-old woman with type 2 diabetes of 15 years' duration presented for a regular checkup. Abnormal ocular fundus findings were seen bilaterally, as shown in Figure 1. She complained of mild blurred vision (visual acuity was 20/40 in both eyes), and she mentioned that she had previously been diagnosed with “early cataracts.” She further stated she had been using “very thick glasses”since childhood and that her vision had always been below normal.

Based on the patient's history and physical examination, which one of the following is the most probable diagnosis? 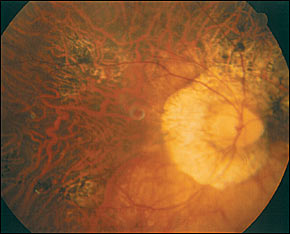 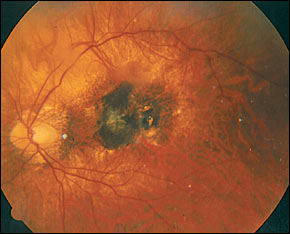 The answer is B: fundus of high myopia. These fundal changes usually are seen in patients with more than–6.00 diopters of myopia, although in rare cases, they can be found in persons with milder refractive errors.1–3 Fundal changes from high myopia include a broad spectrum of abnormalities. Peripapillary chorioretinal atrophy is the most common finding and is seen as a white rim of visible sclera around the optic disc (area between the dotted lines in Figure 2). Areas of atrophic retinal pigment epithelium also may be found in the macular area (Figure 1).

Myopic fundal changes may include more serious findings. “Lacquer cracks” are yellow-white lines representing choroidal cracks, secondary to the mechanical stretching that occurs with the increased length of the eyeball in myopia. Macular hemorrhages and choroidal neovascularization can lead to a drastic decrease in visual acuity. Fuchs' spot describes a round or elliptic elevated dark brown lesion located in the macula that arises because of choroidal neovascularization (Figure 3). In the myopic patient, it is important to examine the periphery of the retina because of an increased risk of retinal tears, which can predispose to retinal detachment.

Idiopathic macular holes would present with smaller, more discrete lesions than the large pallorous areas seen in this patient. The choroid remains unaffected in this condition.

Early nonproliferative diabetic retinopathy findings include dot hemorrhages and exudates, but would not cause large, confluent areas of retinal whitening.

Cytomegalovirus chorioretinitis classically presents with the “scrambled eggs and ketchup” fundal appearance of scattered exudates and hemorrhages. Confluent areas of pallor without any bleeding would not be typical.