Kaiserman I, Anteby I, Chowers I, Blumenthal EZ, Kliers I, Pe’er J.

PARTICIPANTS: One hundred forty-seven patients (147 eyes) with posterior uveal melanoma having a mean age of 61 years (range, 29-97 years) who were treated with Ruthenium 106 brachytherapy.

METHODS: Patients were followed-up with ultrasonography using both A and B modes of standardized echography every 6.7 +/- 0.3 months (mean +/- standard error of the mean) for a total of 1001 ultrasound examinations. On average, each patient was examined 5.8 times (range, 3-17 times). The echographic parameters included tumor base size, height, internal reflectivity, regularity, vascularity, and extra-scleral extension. To compare the response of tumors of different sizes, each tumor was standardized to its initial size at brachytherapy.

MAIN OUTCOME MEASURES: The dynamics of the tumor height and internal reflectivity.

RESULTS: At the time of brachytherapy, the mean height of the tumors was 5.2 mm (range, 2.2-11.8 mm). After brachytherapy, 142 tumors (96.6%) responded by a decrease in height. The decrease in height was at an initial rate of approximately 3% per month. Most of the tumors did not regress entirely; rather, their height stabilized on a constant value (on average 61% of the initial height) after approximately 18 to 24 months. The decrease in height after brachytherapy was best fitted by the sum of a first order exponential decay and a constant (h = 61 + 35*e(-0.12t), in which t = time in months). The half-life of the decay was 5.8 months. Large tumors (>8 mm) had a faster initial decrease in height, and stabilized on a lower percentage of their initial height (50%) compared with small tumors (70%). Thus, the half-life of the height exponential decay was 5.3 months for small tumors (2-4 mm) and 3.3 months for the large tumors (>8 mm). Internal reflectivity increased from a mean of 40% before therapy to 70% after 2 years. The dynamics of the reflectivity were best fitted with the function: f = 45 + 24(1-e(-0.09t)). Larger tumors, which initially had lower internal reflectivity, presented with a slower increase in internal reflectivity (t() = 8.7 months) compared with smaller tumors (t(1/2) = 5 months). 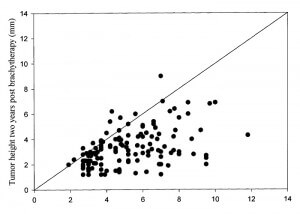 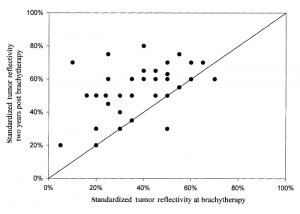