Fort Lauderdale, FL-What constitutes glaucoma progression and the relationship between progressive structural and functional injury? These were the main questions researchers set out to answer during a glaucoma mini-symposium at the annual meeting of the Association for Research in Vision and Ophthalmology.

Moderator Jeffrey M. Liebmann, MD, noted that defining progression is fundamental for conducting of clinical trials that evaluate the efficacy of therapeutic interventions and will be a particularly important issue for pharmaceutical companies and the FDA as investigations of neuroprotective interventions are planned. However, outside the realm of research, the ability to detect progression remains of critical importance to clinicians in their daily practice.

He discussed his own research showing that acid-sensing ion channels are upregulated both within the nerve fiber layer and in nerve fibers as they pass through the optic nerve in tissue from glaucomatous eyes relative to age-matched normal controls. That finding is relevant because under stress, and particularly when exposed to mechanical or ischemic stressors, the acid-sensing ion channels allow influx of sodium and calcium that can ultimately lead to cell death.

The fact that cells in the brain are important in supporting the retinal ganglion cells by supplying growth factors and nutritional elements provides a basis for suggesting targeting those downstream elements with therapeutic interventions that might mitigate further disease progression.
“Once retinal ganglion cell death occurs in glaucoma, surviving neurons may be weakened further as a result of changes occurring within the brain,” Dr. Gupta said. “As we are trying to understand what is happening in glaucoma in terms of why the retinal ganglion cells die, let us not forget about the target neurons and the potential role they may play in progressive disease.”

David S. Friedman, MD, MPH, associate professor of ophthalmology and international health, Johns Hopkins University, Baltimore, reviewed the literature on risk factors for progression from ocular hypertension to glaucoma and worsening of established disease.
“Features that predict a worse outcome have been identified,” Dr. Friedman said. “Now we need to figure out how to incorporate those variables in some form of a global risk assessment for improving our clinical decision making and patient care.”

The Ocular Hypertension Treatment Study (OHTS) and a number of smaller, earlier investigations identified older age and higher baseline IOP as well as an increased cup:disc ratio as predictors for eyes at higher risk for development of glaucoma.
“However, it may be that a subset of the eyes with larger cup-to-disc ratios already had glaucomatous optic nerve damage but glaucoma was not diagnosed because standard perimetry did not identify visual-field ab-normalities,” Dr. Friedman said.

Mean follow-up IOP also correlated with glaucoma risk, and two particularly interesting findings were the identification of central corneal thickness in the OHTS and of baseline IOP asymmetry in one of the pre-OHTS trials. “That latter work has yet to be confirmed, but warrants further evaluation,” Dr. Friedman said.

A number of recent major studies provide information on progression of glaucomatous visual-field defects, including the Early Manifest Glaucoma Trial, the Collaborative Initial Glaucoma Treatment Study (CIGTS), the Advanced Glaucoma Intervention Study (AGIS), and the Collaborative Normal Tension Glaucoma Study (NTGS). Overall, the risk factors identified in those trials are some of the same ones for developing incident glaucoma, including older age and higher IOP at baseline and during follow-up. Other important risk factors for glaucoma progression include the presence of a disc hemorrhage, bilateral glaucoma at baseline, and the presence of pseudo- exfoliation.

David Greenfield, MD, associate professor of ophthalmology, Bascom Palmer Eye Institute, University of Miami, discussed the role of optical coherence tomography (OCT), scanning laser ophthalmoscopy (SLO), and scanning laser polarimetry (SLP) for the detection of progression in populations of glaucomatous eyes or of conversion of ocular hypertension (OHT) to early glaucomatous optic neuropathy. He noted that although stereoscopic optic disc photography is still considered the gold standard for detecting progressive changes in the optic nerve head according to the Preferred Practice Pattern of the American Academy of Ophthalmology, and there are considerable limitations given the subjective nature of the assessment.
Confocal SLO using the Heidelberg Retinal Tomograph (HRT) generates a topographic map of the optic nerve head, and there have been a number of independent publications reporting its ability to detect progressive glaucomatous damage. Those studies have included monkeys with experimental primary open-angle glaucoma and humans with OHT, isolated disc hemorrhages, and early glaucoma.
However, some investigators show changes in IOP can confound detection of progression and topography of the optic nerve head can be affected by diurnal changes occurring throughout the day. In addition, it is difficult to see changes in the optic disc contour in eyes with end-stage cupping, and subtle characteristics, such as disc hemorrhage and atrophy, are difficult to detect.

SLP evaluates the retinal nerve fiber layer, and the latest iteration of this instrument incorporates mechanisms to correct for unique corneal characteristics as well as a normative database. Various case reports provide evidence that SLP can detect progressive glaucomatous and nonglaucomatous structural change, and in a recent case series, Drs. Greenfield, Chen from the University of Washington, and colleagues reported on 17 eyes with disc hemorrhage followed over 31 months.
“We found approximately 60% of eyes developed confirmatory evidence of visual-field changes but only 30% developed confirmatory SLP progression. Overall, suspected SLP progression was not confirmed in 60% of eyes on subsequent testing, thus emphasizing the need for confirmatory structural testing,” Dr. Greenfield said.
The general limitations of SLP are that true biologic changes cannot be differentiated from retest-test variability with the current software and prospective validation is lacking.
OCT also generates retinal nerve fiber layer assessments. Although there are yet no published data regarding its capacity to detect change, in a meeting presentation, Joel Schuman, MD, reported OCT was at least as sensitive as visual-field testing for detecting change in a mixed population of glaucoma subjects followed on average for 3.5 years. The limitations of OCT are that it also cannot differentiate true biologic change from measurement variability because there is no change detection software, and it too requires prospective validation.
“We have seen some good laboratory evidence to suggest that some of these machines are as good as or more sensitive than clinical observers in detecting change. As we go forward, we must keep in mind that those technologies with the highest degree of discriminating power may not be the same as those best able to detect progressive change,” Dr. Greenfield concluded.

Eytan Z. Blumenthal, MD, head, glaucoma service, Hadassah University Hospital, Jerusalem, discussed the current state of detection of progressive functional loss. There remains a desperate need for progression algorithms that can be used in real time in the physician-patient encounter that will be sensitive, specific, and clinically meaningful, he said.
Dr. Blumenthal noted the pitfalls in assessing progression using visual-field testing include the subjective nature of the study, the large redundancy in the human visual system, a floor effect, variability, and the need for multiple confirmations. The biggest barrier to devising better progression algorithms is the lack of a gold standard, he said.

“How can we validate and improve our progression algorithms if we cannot determine who has progressed in the first place?” Dr. Blumenthal asked.

A study comparing human observers and a statistical model for judging progression based on standard automated perimetry (SAP) found reproducibility of the human findings was far lower than that of the model. That result led the authors to conclude human observers are probably incapable of digesting large quantities of numeric data in the format created by the automated perimeter.
“Progression algorithms are all about data reduction. They need to be automated, should rely on a large database, have standardized cutoffs, be clinically meaningful, and feature digital data flow,” Dr. Blumenthal said.

Pamela Sample, PhD, professor of ophthalmology, University of California-San Diego, La Jolla, reviewed new approaches to detecting glaucomatous progression of visual fields, focusing on the development of more sensitive test procedures, improved perimetry programming, modeling progression, and use of more sophisticated algorithms.
“All of these techniques are still investigational, and while they appear to have a lot of potential in offering better sensitivity for early detection and follow-up of glaucomatous visual-field changes, ultimately we will need longitudinal studies to test their validity in the clinical situation,” Dr. Sample said.
In the area of more sensitive test procedures, short-wavelength automated perimetry (SWAP), high-pass resolution perimetry, frequency-doubling technology, and visual-evoked potential of the short-wavelength pathway have all been found in various investigations to be effective in earlier identification of visual-field defects and progressive change.

New approaches to perimetry programming are designed to exploit known patterns of loss and include fundus-oriented perimetry and defect-oriented perimetry. Fundus-oriented perimetry increases the number of test locations in the area of an identified visual-field defect. Defect-oriented perimetry remains a theoretical concept that has not yet been studied, but is intended for use in eyes where there may not be a clear fundus defect. Therefore, test locations around the scotoma are increased while screening of other areas is continued to detect formation of an initial defect elsewhere.
“These approaches give more information and more points to follow and so might have a higher probability of detecting true change,” Dr. Sample said.
Model progression aims to understand variability using sophisticated algorithms to simulate what is happening with the visual fields, and a number of labs are working on that technique to improve detection of true progression. So far, the work done has been based on a linear progression model, although Dr. Sample noted that there may be other types of progression, and they could be addressed by the model.
Machine learning classifiers represent a fourth approach involving use of sophisticated computer-based algorithms that learn from the data set and develop their own classification algorithms. This approach would improve understanding of differences in progressing and non-progressing fields. Most importantly, these classifiers are unbiased in terms of having no preconceived ideas about what represents glaucomatous changes and are able to identify meaningful patterns human experts may not see, Dr. Sample said.
Another advantage of these classifiers is that they have been found to work well with SAP, SWAP, and HRT so far, and evaluations with other instruments are under way. Those findings suggest it might be possible to combine visual function and structure data into a single analysis package.
“If we could input data from the visual function testing and from various imaging devices and possibly risk factors, perhaps we could get a better idea of progression in a given individual and not rely on a single measure,” Dr. Sample said.

Christopher A. Girkin, MD, director, glaucoma service, department of ophthalmology, University of Alabama-Birmingham, noted that the question of whether structural injury predicts future functional injury is still unanswerable.
Part of the problem in addressing that issue is that the answer relies on the methodology for looking at the disease structurally and functionally. The options that have been examined in a variety of studies include histologic studies, clinical assessments of the optic disc and nerve fiber layer, standard perimetry, quantitative structural measures, and specialized functional techniques.
Dr. Girkin noted that human and primate studies show clearly that there is significant loss of retinal ganglion cells prior to identification of visual-field defects. However, those investigations suffer from a number of limitations, including evaluation of small numbers of eyes, high interindividual variability in ganglion cell count numbers, and problems with cell counting methods.
In addition, use of log scale visual fields versus a linear scale for structural measures may explain why structural change has been noted to occur before functional change.
Also, results from various cross-sectional studies and a few longitudinal studies indicate that optic disc and retinal nerve fiber layer changes may appear prior to defects on SAP, and specialized functional testing approaches also have been shown to predict SAP defects.
“Further evaluation of the structure-function relationship is needed using functional and structural techniques that are more sensitive, and this needs to be compared in longitudinal trials,” Dr. Girkin said. 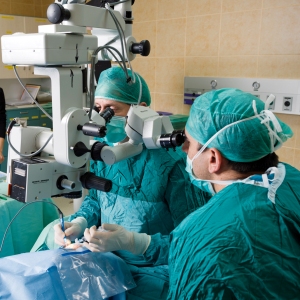 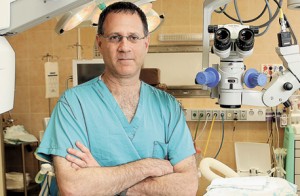 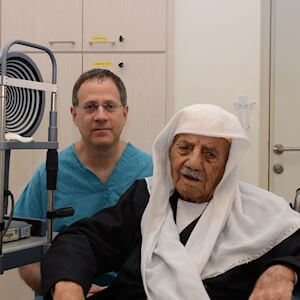 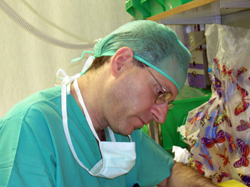 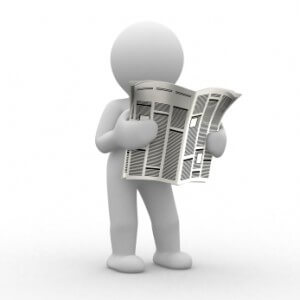