PURPOSE: To evaluate the sensitivity and specificity for discriminating between early to moderate glaucomatous and normal eyes using summary data reports from the Heidelberg Retina Tomograph (HRT), the GDx Nerve Fiber Analyzer (GDx), and the Optical Coherence Tomograph (OCT).

MAIN OUTCOME MEASURES: Each summary report was classified as either normal or glaucomatous. Sensitivity and specificity are reported for each grader, and agreement between graders is reported. 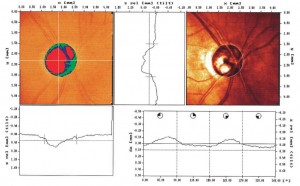